Marketing According to Matthew 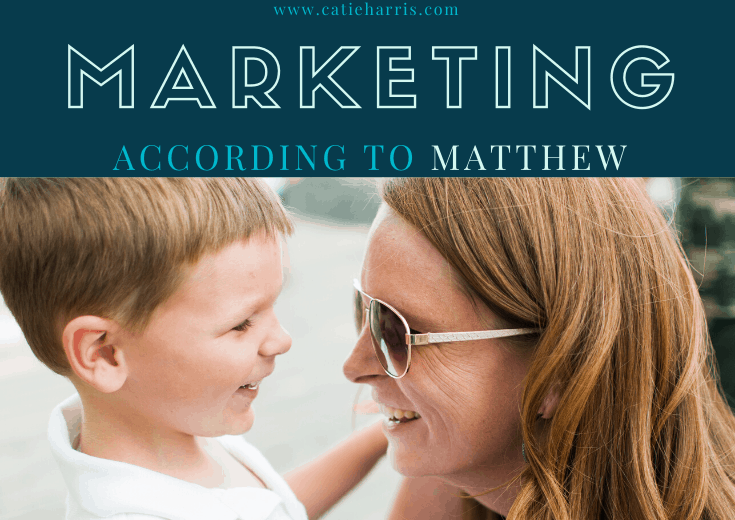 This past week my 4-year old son Matthew and I went over my parents house for dinner. Matthew chose not to eat dinner and even though he was warned he would not get dessert, he defiantly chose not to eat.

A bold choice for a 4-year old, to not eat dinner even when dessert is yummy homemade cupcakes.

As the rest of us ate our cupcakes, poor little Matthew started to cry.  His crying was indeed a heartbreaking moment when the child suffers the consequence of his action.  But to give into him would be worse than his tears (almost).  So I took him in the next room, and we talked about why he needed to eat dinner before eating dessert.

I’m quite sure my argument didn’t hold much water, but he did seem to get the concept that no dinner = no dessert.  So we made a bargain that I would put together his dinner again (this point had long cleared the table), and if he ate it, he could have a cupcake.

Matthew agreed and ate everything on his plate.  I knew he wanted the cupcake next, so I got up to get it.  And this is when Matthew started giving me some valuable marketing lessons.

He said, “Go ask Mom-Mom if I can have my cupcake now.  And if she says no, keep asking her until she says yes.”

The profundity of this comment oddly struck me.  Here a 4-year old child understood and implemented advanced marketing techniques, the kind I have spent thousands of dollars to learn over the last few years.  The type of marketing I have struggled with because I don’t want to be annoying or bother anyone.  He knew the marketing techniques instinctively.

And so do most young kids.  If you want to learn anything about marketing and negotiating, hang out in a preschool.  It’s not until a couple of years later that we get our instincts beaten out of us so that we submit to cattle herding.

The lesson that Matthew taught me for free (that I had already spent thousands to learn and then chose to ignore the advice) is simply this:

If you want something, you believe in something; you need to do everything in your power to make sure you get it done.  Being persistent pays off.  Don’t try something once or for a couple of weeks and then declare it doesn’t work.

You might be enjoying your proverbial cupcake right now.

PrevPreviousWhy Am I Such An Angry Nurse?
NextThe Definitive Guide To Generating Ideas For Your Nursing BusinessNext