Know It All Nurses 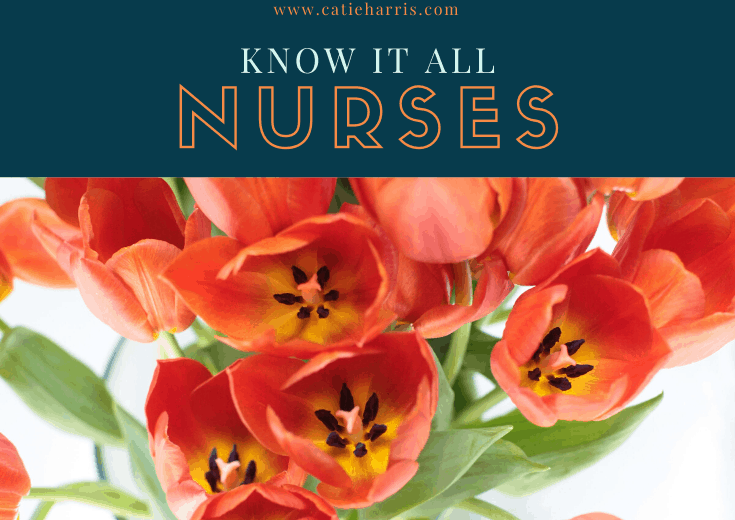 Know It All Nurses

Nurses who know it all. Have you ever come across that nursing student or new NP who just seems to know it all? They always have a good answer, they can pull research out of the air, they come up with pertinent information.

Somehow, some new nurses just seem to have it so easy.

Is it because that nurse is smarter, better, just more natural? I ran into a situation like this several years ago. I wasn’t a new grad at the time, in fact, I thought I was on the top of my game.

I had become a super nurse practitioner at my own hospital system, so when I went to a new hospital, I thought that title would follow me. But at the new hospital, they already had a super NP, her name was Karen.

And to her credit, she was a super NP. So naturally, I didn’t like her for a long time. Karen was so good, I became to worry that people would compare the two of us and think basically I just sucked.

I struggled for a while with this internal fear. I remember one incident where I had a critically ill neuro patient that no one could get a central line on.

Central lines are my forte, so I boldly and proudly went in to do the line and got it fairly easily. I announced my victory to the world and went back to my office, only to receive a call from radiology that I had a pneumothorax.

I very sheepishly crept back into the unit to let Karen know because she was the only one who could do chest tubes.  So essentially she stole my minor victory and the rest of my self-esteem.

So I began doing things that were counterproductive, such as avoiding any place I knew Karen would be, not speaking up in meetings where Karen was, not competing on any level with Karen just to avoid people comparing us.

The problem though was my job involved doing a lot of the same things Karen did and I really was starting to suck. It was almost like a self-fulfilling prophecy.  I was so absorbed with what Karen was doing and how much everyone liked Karen that I wasn’t doing anything well.

I’m telling you this story because it happens all the time. The fact of the matter was Karen was simply a stronger NP than I was at the time. But my obsession with her success was counterproductive.

Later I realized that I was the only one comparing myself to Karen. Sure everyone loved when Karen was around to save the day, even I was glad she could help me get things done, but her wins weren’t my losses.

I created my own losses by avoiding situations where I could learn something just because I was afraid of Karen showing me up. My biggest moment was accepting that Karen was simply better than me at some things.

This knowledge was surprisingly difficult but very liberating. Even though Karen and I had been NPs for the same length of time, we had different experiences.

Her father was an MD, she did flight nursing, she pioneered her role faster and earlier than I did, and she had the support of the hospital to foster new skills and increased levels of responsibility.

I know it’s hard to do, but you can’t compare yourself to others. Even if you start orientation the same day with another new Nurse, you will reach your milestones differently.

You will likely run into “Karens” wherever you start working. And if nothing else as a novice you will lose your feeling of being good and competent at something.

This belief help set up milestones to attain in the beginning is so important. It helps you from getting distracted by what Karen is doing.

It doesn’t matter what Karen is doing, it matters what you are doing, how you are learning and where you are trying to direct your career. It’s been several years since my experience at that hospital.

I have moved on into different spheres of nursing, academic, corporate, entrepreneurial. Karen is still working on that unit probably better than ever at this point. We wanted different things in our career.

My experience as a novice so many times in my career has carved out an empathy that I feel for other novices. Hence, the creation of this website and my analog courses in mentoring.

My advice to you as you are getting started or becoming a novice in any space for that matter is to organize your goals, write down your milestones and let other people teach you.

If the new nurse you start with learns things faster and more seamlessly, ask her questions, use her as a resource.

Don’t make the mistake I did and avoid them or become jealous to the point that it affects your work.

Keep focuses on the things that you can control.

The NursePreneur Nursing Podcast Get Inspired By Listening to Professional Insights from Successful Nurse Entrepreneurs A little inspiration can go a long way. Join Catie Harris, a successful nurse entrepreneur and mentor,